NFL Offseason Notebook: Colts Go Back to Aging QB Well
Does the trade for Matt Ryan help the Indianapolis Colts? Mike Schottey explores that and more in his weekly NFL notebook. 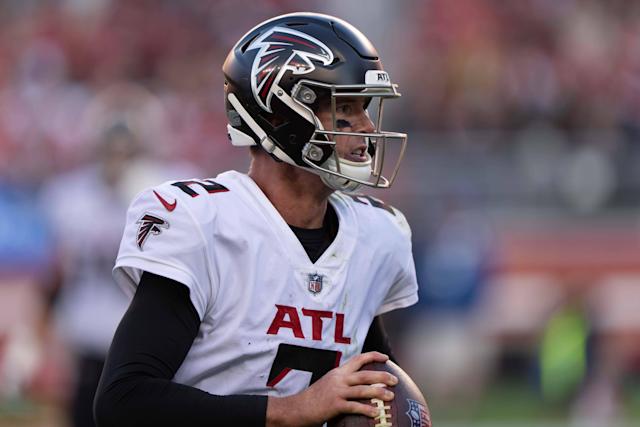 We’ve seen this dance before.

The Indianapolis Colts kept the 2022 NFL QB Carousel spinning on Monday with the acquisition of former Atlanta Falcons QB Matt Ryan for a third round pick. It’s one of those Rorschach test trades in which a person’s analysis is largely going to be predicated around how they see the league.

Bare bones of the trade, the Colts receive a 36-year-old quarterback (soon to be 37) coming off a disappointing season in which he still almost passed for 4,000 yards. The Falcons are now left with almost nothing at the quarterback position and have turned to Marcus Mariota as their rebuild caretaker due to his familiarity with Head Coach Arthur Smith.

I do not like this trade for the Colts.

A third round pick is not much to give up—it was actually the lower of two third-round picks the Falcons had, so the price was right, but I wholeheartedly believe they got the wrong player. Ryan has been on a steady decline for sometime. Yes, things fell apart in Atlanta, but he had Cordarrelle Patterson, Kyle Pitts and Russell Gage (now with Tampa Bay) last season. That’s better than what Ryan is going to have to work with on the Colts roster—barring more moves, of course.

This is who Colts GM Chris Ballard is. With the Chicago Bears and Kansas City Chiefs, Ballard was part of teams that swung and missed again and again on quarterbacks and relied on aging veterans as stopgaps. With the Colts, Ballard has brought in Philip Rivers, Carson Wentz and now Ryan. It’s the only way he understands the QB position, and it’s going to keep the Colts on the outside looking in of an increasingly tough AFC.

Yes, Ryan gives the Colts a chance to win the AFC South in 2022, but nothing more. They are not a Super Bowl contender with Ryan, nor do they seemingly have a plan past Ryan who may give them a potential second year and nothing more. Last year, the Colts were one of the youngest teams in football and are built around a 23-year-old running back, a 26-year-old offensive guard and a 26-year-old linebacker. Their window is not closing, it’s barely open and will fail to be with continual stopgaps like Rivers, Wentz and Ryan at the most important position.

The Schottey Six: Teams That Haven’t Done Enough (Yet) in Free Agency

With the first wave (and then some) done in Free Agency, here’s a look at some various teams that haven’t done much…who may be more focused on the draft or simply waiting for the right players at the right value.

1. New England Patriots — The Patriots went all in on free agents last offseason and barely missed the playoffs. They don’t have a ton of effective cap space at the moment, so expect them to make some value moves and restock through the draft.

2. Arizona Cardinals — Another team that has little to spend, one has to wonder if Kyler Murray drama has kept free agents from being excited to join him in the desert.

4. Detroit Lions — The Lions spent the early part of free agency mostly just keeping their own, which has some positives as to an improving team culture, but the roster needs a bunch of help. They do have some of the most draft capital this season, however.

5. New Orleans Saints — They’ve spent the offseason getting their financials in order and in the Deshaun Watson sweepstakes. Now, they’ve signed QB Jameis Winston and aren’t going to have a lot of other money to spend.

6. Chicago Bears — They’ve traded Khalil Mack and seem content to fill out the back end of their roster even though they have some of the most money to spend. It also appears that they’ve been “in” on a few guys who did not share their excitement.

Cleaning out the Notebook:

— As of this morning, this notebook’s top section was going to be about the Cincinnati Bengals who signed former Dallas Cowboys offensive tackle La’el Collins this weekend. With Collins, along with interior linemen Ted Karras and Alex Cappa (and likely at least one high draft pick on the offensive line), the Bengals’ offensive line is in a lot greater shape than it was last season.

— I suppose we gotta talk Deshaun Watson, huh? As I said on this morning’s Three & Out Key Takeaways, I hope he somehow never takes a snap for the Cleveland Browns and they have to eat that massive contract. Dude is a good quarterback, but the fact that 22 women have credibly accused him of sexual assault and he’s being rewarded for it makes me sick.

— I’m not sure if Baker Mayfield gets moved this offseason. The Browns have at least some reason to want to keep him around if/when Watson gets a suspension from the NFL and the market doesn’t seem too strong for him with Jimmy Garoppolo also out there. It’s always possible with teams like Seattle and Carolina looking hard for quarterbacks. I wouldn’t be surprised if he moves draft weekend, though.

— I got done writing about the AFC West’s incredible offseason last week and the Packers responded by sending Davante Adams to the Raiders. Derek Carr now has his best receiving corps ever and I’m excited to see what he can do. They still seem like the third or fourth best team in that division, though…

— JuJu Smith-Schuster seems like the perfect fit for the Kansas City Chiefs at wide receiver. He’s a beast on intermediate routes and can run the “scramble” drill to perfection. It’s a great fit for Mahomes who hasn’t had a weapon quite like this and it’s going to open up some things for Tyreek Hill over the top as well.

— Another really good fit that has flown under the radar is linebacker Myles Jack to the Pittsburgh Steelers. When Jacksonville surprisingly released him, I thought he was due for a low-money deal to a contender like Tampa Bay or the Los Angeles Rams, but instead he has a chance to be the next in a long line of Steelers linebackers after they struggled at the second layer of the defense last season.

— As much as we’ve talked a lot about how much money big time sports announcers are getting recently, it’s worth noting that Fox cared for Buck roughly the same as they cared for one Big Ten football game with which they will make millions in ad revenue. Sports rights are still king.

“The harder you work, the harder it is to surrender.“ —Marv Levy