New York Mets Vs. Washington Nationals Odds, Picks and Predictions: How To Bet Jacob deGrom's Return
Why Jacob deGrom should dice up a depleted Nationals lineup. 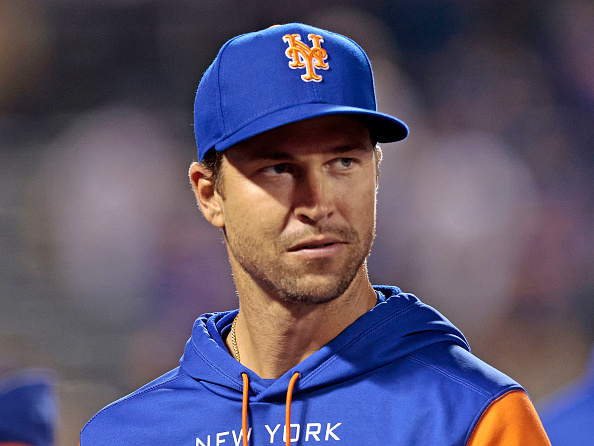 Welp, In the middle of writing this preview, Juan Soto and Josh Bell were shipped off to the Padres for a haul of prospects and potentially Eric Hosmer (if he waives his no-trade clause).

The biggest story heading into this game is still the return of Jacob deGrom, but the Nationals have officially entered full-tank mode, and their lineup is not set for tonight, but I can tell you it is going to be deplorable. However, this works in our favor with our best bet for this game. Washington is basically sending out a AAA team out there tonight, and the Mets are one of the hottest teams in baseball with one of the game's best starting pitchers on the mound.

Guess Who's Back, Back Again, Jacob's Back, Tell A Friend:

There is probably not a better team for the best pitcher in baseball to make his return against, especially after the big trade the Nats made this morning. I am not expecting peak deGrom in this game, but he has a fairly easy test today.

The only question for deGrom is how long are the Mets going to let him go tonight? His longest rehab start only went 67 pitches, so unless we get a magical performance, he probably will not see past the fifth inning (more on the first five innings of the game later).

In his career, deGrom is 9-4 in his 21 starts against the Nationals, and he also has a 2.44 ERA with a WHIP of 1.00, and that is against a lineup that had big names like Soto, Bryce Harper, and others.

Offensively, the Mets continue to mash the ball as they put up seven runs last night against Washington. Over the last two weeks, New York's offense is ranked second in WAR (3.1) and wOBA (.369), and the Mets have the best wRC+ at 145. Tonight, Washington will opt for a bullpen game, which is the cherry on top of what should be an awful night for Nationals fans.

Cory Abbott will get the nod for Washington tonight, which is a good thing as he enters this game with an ERA of 2.25 and a FIP of 3.09. However, his xERA of 0.83 and xFIP of 3.09 should give a team that is spiraling some form of hope.

I Did Not Know What To Say About The Nationals, So Here Is Their Lineup:

*Will be updated, but I promise, you have no idea who is going to be on the lineup card.*

This is going to be a tough couple of months for the Washington Nationals. No one expected them to even come close to contention this season, but after trading arguably the most impressive 23-year-old baseball player in the history of the damn sport, they certainly have no promise for the rest of the year.

The Mets would have been massive favorites even if Soto stayed in the Nation's capital, so we are staying away from the ML and RL because there is just no value. Instead, we are going to take a look at some F5 lines.

New York's lineup has been very fun to see, and watching Francisco Lindor, Pete Alonso, Jeff McNeil, and Starling Marte start to gel together have made the Mets one of the more fun teams in baseball.

They should have no problems with a Triple-A lineup tonight. I have multiple Mets picks for this game.